Something very exciting has happened! I finally got someone to agree to do a GUEST POST for Follow Your Bliss (FYB) ! My other family members think they are too cool or something…but I knew I could count on my BIL….  (I already asked if he could just take this thing over because he is way funnier and a much better writer than I). ENJOY:)

Allow Me to Reintroduce Myself……

I’m not sure if it started as a joke or not but texting back and forth with Liz one Friday night she presented that I come out with a cameo blog post and it might have been the liter of wine talking but I thought it was a great idea and immediately started to come up with what my theme would be and what I would blog about because I knew one thing was for sure…..I had to kill it. I could easily blog about what an amazing sister-in-law Liz is and all of the great things she has done, but let’s be honest, everyone that reads this blog is well aware of this. The best compliment I could give to Liz is to stick to the theme of the blog and go from there.

My guest blog’s theme and topics were easy-it was the title that took me the longest time to come up with. So I did what I normally do when I am at a roadblock…..channel my beloved Tom Brady (TB12). For as long as I can remember whenever TB12 takes the field at Gillette he comes out to Jay-Z’s Public Service Announcement. So whenever I hear the opening line of “allow me to reintroduce myself….” it brings me to a happy place.

I’m so proud of Liz for getting out there and just knocking out half and full marathons in her sleep every six weeks or so but she has failed to mention who inspired her to get in to running. You do not have to look too far for that answer because he is the guy writing this blog. Back when Liz was swimming laps and worshiping Mike Phelps, her soon to be Bro was preparing for the Newport Half Marathon. My training consisted of waking up at 5:00am and running 2.5 miles…..one time. The rest of my training was just a few trips to the elliptical. However, on a very cold October day that was full of rain, wind and hail I was able to literally weather the storm of Ocean Drive in Newport and complete my first half marathon. So I’m sure she was thinking, well if this slob can do it, any one can do it. You’re welcome! 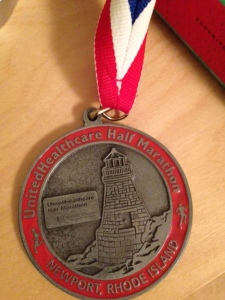 If you have read the post a month back you would know that we have recently moved to Bristol and at the end of our street is the East Bay Bike Path. So I went out and got myself a little house-warming gift hoping that it will get me motivated to get out there and run a little bit. Of course its been extremely cold so these won’t be busted out until the end of the month once its gets a little warmer…even though I have a sick obsession with Under Armour. 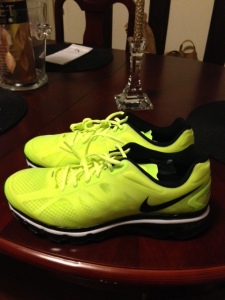 Now on to the good stuff. One of the best things about getting married is that every one gives you their favorite recipes and thanks to Liz for organizing it within the family because we received a ton. Thanks to Shannon, I think I may have found something that has shot up to one of my top five dishes.
Stuffed Peppers
PointsPlus Value: who cares!
Servings: 6
6 peppers (cut the tops off and make some holes in the bottoms)
1lb of turkey meat
1 cup of quinoa
½ large onion
2 cups of jarred tomato sauce
1 ½ tsp garlic salt
2 tsp tabasco
2 ½ tsp worcestershire sauce
1 tsp salt
1 tsp pepper
1 tsp chili powder
1/3 cup feta cheese
2 tablespoons of pine nuts (toasted) 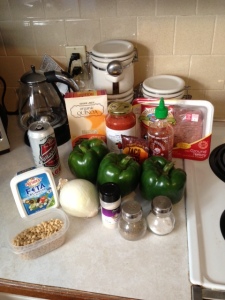 *The Narragansett doesnt belong but if you do not have time to prep making this meal takes awhile so you may need to drink to pass the time
Instructions
Preheat the oven to 400 and boil the quinoa as directed (normally its 2 cups of water for each cup of quioa) then simmer until water is gone. Cook the ground turkey over medium heat. While that is going on, chop the tops of the peppers and combine with the chopped onion. Once the turkey is done combine the chopped pepper/onion, tomato sauce, salt/pepper and garlic sauce and cook over medium heat. Now this is where I change it up a little. I don’t use the chili powder, tobacco and Worcestershire sauce because I use something way better…..I substitute my obsession because it makes everything better…..Sriracha (fun fact: named after the coastal city of Si Racha). Now if you take my approach I eye-ball it because I cant get enough of this stuff but Steph has a weak palate and says it has too much of a punch so I try to keep it in the middle to satisfy both of us. 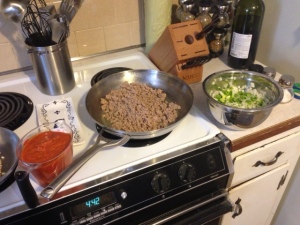 Now combine all of the remaining ingredients: quinoa, feta cheese and the pine nuts. I know it serves 6 but I always find myself with extra after the peppers are stuffed. 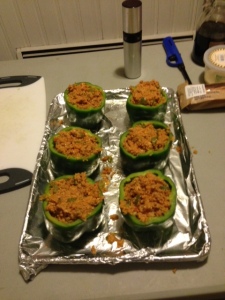 I always leave them in longer than 30 minutes because I like the tops crispy. You may want to let them sit for a few minutes because they will be hot…..you may also want to add more Sriracha-thats allowed. 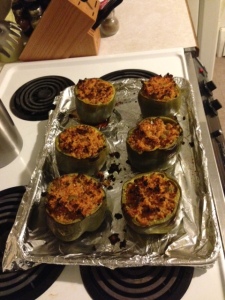 Well it was a pleasure to guest on the FYB Blog and I’m thankful Liz thought of me to throw my two cents in….plus I had to redeem myself from that fake hipster picture that was posted of me a few weeks back. I really challenged myself to not drag on because I am known to send a quick email or text which always turns in to a novel once I’m done typing and always full of grammatical errors. I even cut down on my sarcastic jokes but maybe I’ll be able to pop in once and awhile to air out my sports, entertainment and life grievances because I’m sure everyone is dying to know them…..cant wait for the new Big East…..I’m out

3 thoughts on “A GUEST POST FROM PAT + HIS SECRET STUFFED PEPPERS RECIPE!!”